on September 12, 2018
George Weah, President of Liberia and former World Footballer of the Year, made a surprise return to international football in Monrovia on Tuesday, playing for 79 minutes in a 2-1 friendly loss to Nigeria a few weeks short of his 52nd birthday. 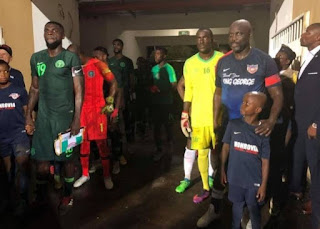 Liberia had arranged the friendly to retire the No. 14 jersey made famous by Weah but fans were in for a shock when, 16 years after his last international appearance, the former Paris Saint-Germain and AC Milan striker led the national team onto the pitch wearing it instead.

All of the Liberia players — including Weah’s former teammate, 48-year-old James Debbah — wore shirts bearing the message “Thank you King George” on the front.

Weah, who led the attack and showed glimpses of the class that made him a global star, received a standing ovation from fans when he was substituted with 11 minutes remaining.