Following disturbing reports of celebrities going into depression, several people and celebrities alike have taken to the social media platform to express their take on the issue. 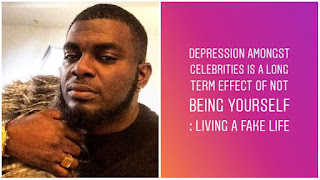 Earlier on, Nigerian singer, Harrysong, left many people alarmed after he took to his Instagram page to share what appeared like a su*cide note. Shortly after the post went viral, the singer confirmed he was suffering from depression.

Well, the post appeared to have set off a chain reaction of opinions as many people and celebs alike have taken to the platform to share their opinion on the matter, one of which is Nigerian singer, Kellyhansome.

Still on the issue of depression, yet another Nigerian celeb has taken to social media to confirm he might be in need of help as well. Nigerian singer and producer, Samklef has revealed that he is going through issues. The producer wrote on Twitter: "I need emotional counseling."

Following these series of reports, Nollywood actress, Yvonne Jegede-Fawole, revealed on social media her personal opinion on depression. According to her, most people now tend to seek validation from the number of likes and comments they get on social media. She urged people to "put their phones away and stay in touch with humanity."
Labels: depression Entertainment News