on September 05, 2018
A Nigerian couple are set to face the wrath of the law in the US after their 15-year-old son starved to death during a 40-day fast. 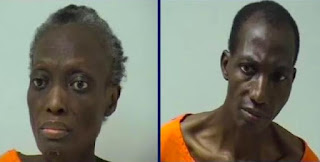 Police in Reedsburg, a small town in Wisconsin, said the deceased father, 49-year-old Kehinde Omosebi had reported the death of his son on Sunday afternoon.

However, when officers got to the family’s home on Alexander Avenue, they had to force their way in through doors that had padlocks on the inside and found the boy, Ayanfe Omosebi, “extremely emaciated and deceased”.

The mother, 48-year-old Titilayo Omosebi, and an 11-year-old child were discovered extremely emaciated but alive.

According to reports, Reedsburg Police Chief, Timothy Becker, said the father described himself as a “religious minister affiliated with Cornerstone Reformation Ministries,” and the family started their fast on July 19.

Kehinde Omosebi told police his son died on Friday, which would have been the 44th day of the fast.

No food was found in the home and the mother and 11-year-old child were brought to a hospital for medical treatment, but Titilayo Omosebi refused, citing religious restrictions.

He said the 11-year-old child was placed in protective custody and brought to the Children’s Hospital in Madison.

Sonny Hyde, pastor of the Cornerstone Ministry Baptist Church in Reedsburg, said the family was not affiliated with his church, and he said he has not heard of Cornerstone Reformation Ministries in the community.

“We’re certainly praying for the other child,” he said.

Doug Knuth, who for about eight months has lived next door to the duplex the Omosebi family lived in, said he does not recall ever seeing the family.

He said he didn’t know about the situation until he was contacted by a television news station Monday.

An autopsy for the 15-year-old boy is scheduled for Monday, and the Wisconsin State Crime Laboratory will help the police department in the investigation.
couple death News Nigerians police starvation USA