Notorious Armed Robber Voluntarily Submits Himself To The Police

on September 18, 2018
A member of an armed robbery gang, Ahmed Idris, who voluntarily surrendered himself to the security agents in Ondo State, on Tuesday, said the pressure from his mother led to surrender to security operatives. 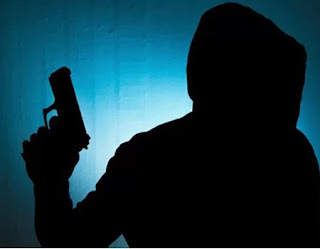 Speaking to newsmen during his parade at the Police headquarters in Akure, Idris said his mother’s prayers and the pressure from her, urging her to quit the criminal acts changed his mind.

H, however,r said though he was an armed robber but said that he was now a repentant armed robber.

Speaking during the parade, the State Police Public Relations Officer, (PPRO) Mr Femi Joseph, said ” on September 6, 2018, at about 330pm AhmedIdriss of Ajaokuta local government in Kogi state, reported himself at a Military checkpoint in lfon as a repentant armed robber who had participated in so many armed robbery incidents”

The PPRO said that the suspect also confessed his involvement in many armed robbery cases in the state and said “the suspect during interrogation said that his former gang members had been threatening to kill him if he did not rescind his decision to quit the illicit trade.


“ln the course of the investigation, two members of his gang were arrested namely Sunday Alamboso and Moses Igenegba.

The Police image maker said another member of the robbery syndicate, Yakubu Ibrahim, who incited youths against the police while the trying to arrest him was also in police custody.

He said the kingpin of the gang, simply identified Micheal, took to his heels immediately his boys were apprehended.

Micheal was said to have led members of the gang to rob a Senator in Kogi State where some motorcycles to be given out as empowerment to indigent members of his constituencies were carted away.

Also paraded was one of three armed robbery suspects who specialises in using motorcycles to rob innocent citizens in Ore, in Odigbo Local Government Area of the state.

They reportedly robbed a boutique at Sabo in Ore where they disposed both the customers and attendants of their belongings including wrist watches, cash and telephone sets.

Joseph said as the robbers were trying to escape the attendant raised an alarm which attracted police officers on patrol who immediately arrested one of the suspects Adedeji Mutiu aged 28.

The command spokesperson said all the suspects arrested will be prosecuted at the conclusion of the investigation.