OSUNDECIDES: 'Bringing You Up To The Realities' By Awoyemi Ayomide

OSUN GUBERNATORIAL ELECTION: BRINGING YOU UP TO SPEED. 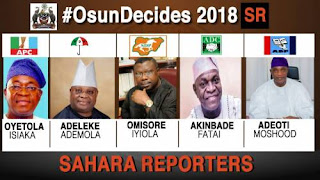 The big question which remains largely unanswered in the minds of everyone who has  been following the buildup to the Osun election is: WHO WILL EMERGE VICTORIOUS? on the 22nd of September .

The answer to this question has never been so blurry as it is now, with barely hours to the announcement of the election results .

The election has a record of 48 political parties contesting and fighting for the number one seat in the state. Of the 48 parties, 5 stand with a decent chance of making it to the government house in Abere.

These 5 candidates include(in no particular order): Gboyega Oyetola of the APC, Iyiola Omisore of the SDP, Fatai Akinbade of the ADC, Ademola Adeleke of the PDP and Moshood Adeoti of the ADP.

Most of the candidates are rooted politicians with impressive political profiles as far as Osun Politics is concerned. Omisore is a former deputy governor, a two term senator who served as the chairman of the appropriation committee in the red chamber.

Adeoti has served at the grass root as councillor, local government Chairman, Party chairman of the defunct Action Congress of Nigeria(ACN) and secretary to the state government(SSG) before his resignation under the Rauf Aregbesola led administration. Akinbade once served as a commissioner and SSG under Oyinlola's administration.

The first and only political appointment of Oyetola is as Chief of Staff of the governor and Senator Ademola as a product of a bye-election to fill a vacant senatorial seat.

Making these two candidates the least experienced as far the Osun state political terrain is concerned. They however both have at their disposal strong parties with deep rooted structures at the grassroots to deliver them victory at the polls.

An important sect that cannot be under estimated in the election are  state government workers that make up a considerable amount of the working as well as voting population in this state.

It is often said that in Osun, the workers play a major role on who emerges. The lack of support and the subsequent loss of Bisi Akande's re-election bid in 2003. The ruling APC will therefore have to be wary of the unhappy disposition of the workers to the current government to which Oyetola is seen as a major role player.

However in the course of the ongoing electoral process as Osun people decides their next governor , many reports have been trooping in from various polling units within the state .

With major results coming from the strong hold of major contenders of the election , the APC's Oyetola is said to be leading by winning most polling units in Oshogbo the state Capital where most landmark project has been established by the current APC administration in the state .

Also, the PDP's Adeleke is also reported to be having a huge victory in Ede which happens to be his hometown and strongest political base for his political party. We should recall that has been alleged ADEMOLA Adeleke is the party flag bearer because of the death of his brother Isiaka Adeleke who was formerly occupying the senatorial seat which ADEMOLA currently holds.

And last of the major contenders is Iyiola Omisore of the SDP (the white horse party). He controls the Ife Axis and has the popularity no other person has. But the biggest fear for Omisore is that will his party's faint popularity help him secure votes.

This and many updates will come in later.