Juve Confident As Ronaldo Will Play Against Manchester United

on September 27, 2018
Cristiano Ronaldo will be able to face his old club Manchester United in the Champions League next month after UEFA handed the Juventus forward a one-game ban on Thursday. 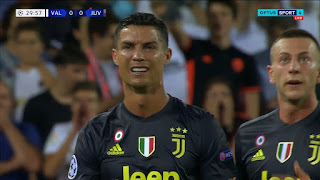 The Portuguese superstar was sent off in Juve’s win away to Valencia last week and risked a potentially lengthy suspension, but instead he will only sit out his team’s game at home to Young Boys next week.