Life has apparently imitated art for one romance writer. 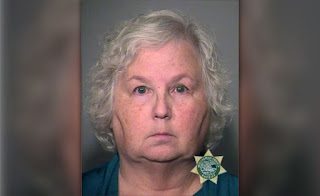 In a twist of irony so devious it would have turned Agatha Christie green with envy, Oregon chef Daniel Brophy was found shot to death nearly seven years after his wife of 27 years penned an essay titled “How to Murder Your Husband.”

Nancy Crampton-Brophy, the writer of sensuous mysteries such as “Hell on the Heart” and “The Wrong Husband,” was arrested for murder on Sept. 5 — more than three months after the death of her spouse.

“Dan was one of the very few people I’ve known that knew exactly what he wanted in life and loved doing it,” she said at a candlelight vigil two days after Daniel’s demise.


Oregon cops were mum on arrest details such as why Crampton-Brophy, 68, was taken into custody only last week for the June 2 shooting.

Daniel Brophy, 63, who was found dead in the Oregon Culinary Institute in Portland, had worked there as a chef for over 10 years.

Relatives were stunned by the news, and the author’s sister is convinced Nancy is innocent.

“None of us believe it,” said Holly Crampton. “It’s craziness and it’s just not true,” she stated to ABC News.

A neighbor of the Brophys from Beaverton, Ore., recalled the writer saying she might move to escape her old life.

“She said that his side of the bedroom was haunting her,” Heidi Hutchinson told People.

Crampton-Brophy remains jailed for unlawful use of a weapon and murder.