Some Security operatives and Political thugs have taken over the Orolu community and prevented the voters from casting their votes. 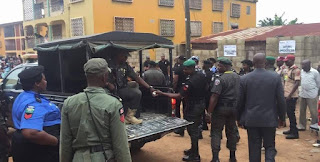 At Disu Oke-Odo area, ward 7, Kajola road in Orolu community, voters were were prevented from getting to polling centers as some political thugs who were fully armed were shooting sporadically.

I'm an interview with the residents of Disu community,  they verified that gunshots has sporadically filled the air since yesterday evening and as a result, they are no longer willing to go out and vote the candidates of their choice .

Hon. Oludele Adesoye, former supervisory Counselor for Education in Orolu, told newsmen that his people were chased away by some unknown thugs who were armed with heavy weapons .

Adesoye said , ” My people came out as at 6:00 am heading to their polling units but immediately, we heard gunshots and later we saw armed guys coming from the bush.

He said the security personnel were called to rescue the situation but none of them showed up .
Labels: News Osun rerun politics