Train Crushes A Motorcyclist And His Passenger To Death In Lagos

on September 19, 2018
A moving train on Wednesday killed a motorcyclist and his passenger at the PWD level crossing along Ikeja-Oshodi route of the railway line. 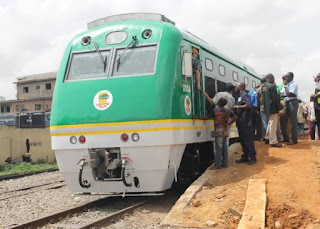 Mr Jerry Oche, the Lagos District Manager of Nigeria Railway Corporation, confirmed the incident to the News Agency of Nigeria on Wednesday.

Oche said that the incident, which happened in the morning, involved an Ijoko-Apapa train at the level crossing where the motorcyclist refused to stop for the moving train.

“We have warned passersby, motorists and other road users to stay away from railway tracks.

“Railway track is a very dangerous place to toy with; everything involved is iron both the rail tracks and the train itself.

“I learnt that he was trying to outsmart the train before he was crushed by the moving train.

“We are appealing to people to learn from such incident and exercise patience at the railway level crossings across the state,” he said.

The district manager said that the remains of the victims had been deposited at the mortuary, while the police were working towards contacting the family of the victims.