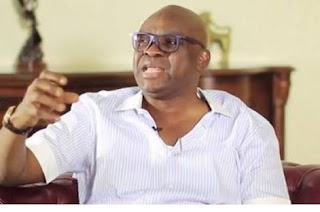 The workers in a joint statement signed by NLC chairman, Prince Raymond Ade Adesanmi and his TUC counterpart, Mr. Odunayo Adesoye and made available to our correspondent described it as an act of insensitivity to the plight of workers in the state.

The union wondered why a governor who had refused to pay backlog of salaries would be contemplating buying of exotic vehicle and paying himself severance allowance as partying gifts.

They disclosed that there would be industrial crisis in the state if the governor proceeded with his plans in paying himself and his Deputy that huge amount and purchasing the new vehicle.

“If it is true that the state government has approved the purchase of N74 million worth of vehicle as parting gift and N43 million severance package each for the governor and his Deputy, we stand to condemn it in its entirety, it is an act of selfishness and insensitive to the plight of workers and pensioners in Ekiti State

“If a government is owing workers several arrears of salaries and at this critical time that the state ought to have mopped up all its resources to ensure that the outstanding salary arrears and other entitlement are defrayed, that the governor as an individual is now clamouring for the payment of severance allowance and take away gift of N74 million Utility Sport Vehicle.

“We call on the governor to desist from such act and look for a way to pay workers’ salaries and if government should go ahead with this action there will be industrial crisis in Ekiti State,” the union leaders said.

On the allegations of assets stripping leveled against Fayose, Adesanmi said, “I don’t think that act is right, we stand to condemn it as well, because if property has been existing for several years now and has not been sold by previous governments and you have just few weeks to exit and you are putting them up for sale , it is condemnable and people buying that kind of property should know that this is not right, the incoming government would set up adminstrative panel to look into it.”


On his part, a chieftain of the All Progressives Congress (APC), Prince Dayo Adeyeye while condemning the alleged act, urged the leadership of the APC to be more vigilant to prevent the state from being plundered by the outgoing government.

His words, “I have always maintained that Governor Fayose can’t be trusted. I know he will like to appropriate everything to himself. We learnt he has been selling state assets , like the Erunfun Land along Ijan road. That land was bought by Chief Obafemi Awolowo in 1949 and he never appropriated it.

“We have had many governments in Ekiti, former governors Oni and Fayemi had come and never contemplated to sell the land, but Fayose was planning to sell it to himself, Ekiti people won’t accept that.

“It was Fayemi who is supposed to send him off, but due to selfishness, he decided to appropriate that to himself, that is not a trait of a good leader.

“For four years, Fayose didn’t do more than five projects and he claimed he had performed. He only touched two towns throughout the time. Schools, hospitals and roads have decayed under Fayose. No investments in

Agriculture, road network , everything was neglected. Not even a single investment was witnessed in Agriculture, so that victory was a sound one for APC and Ekiti people.”

When contacted for reaction, the Commissioner for Information in the state, Lanre Ogunsuyi said he had no comment on the allegations.