"Why We Suspended The Nationwide Strike" - Labour Congress

on September 30, 2018
Leaders of Nigeria’s labour unions on Sunday announced the suspension of their four days national warning strike but said the face-off with government is far from over. 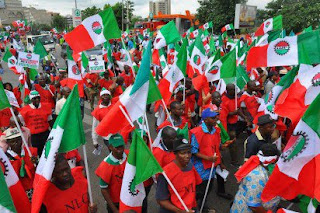 The unions began the warning strike on September 26.

On Sunday, they said they were suspending it in order to enable a conducive environment for a crucial meeting of the tripartite committee involving the unions and government next week October 4 and 5.

“We have received a firm and formal invitation to a reconvened meeting of the tripartite committee scheduled for 4th and 5th of October, 2018,” the unions said at press Sunday afternoon.

The President of the Nigeria Labour Congress (NLC), Ayuba Wabba, who addressed the briefing, said next week’s meeting will be the final session of the tripartite committee after which a final report will be submitted to President Muhammadu Buhari.

“Organised Labour has, after obtaining the mandate of their necessary organs, decided to suspend the strike action with effect from today, Sunday September 30, 2018,” Wabba said

“We urge all our unions and state councils to maintain a high level of mobilisation and readiness until the struggle for a reasonable minimum wage is achieved,” he stated.

Speaking in the same vein, the acting president of Trade Union Congress of Nigeria (TUC), Sunday Salako, in an interview on Sunday afternoon stressed the unions are not calling the strike off but suspending it until their demands are met.

“The essence of the suspension is that we will go back on strike if the committee did not meet our demands,” Mr Salako said.

He said the outcome of the tripartite meeting will determine subsequent actions of the unions.


“We are also members of the committee. If we go there on Thursday and Friday and there is no seriousness or the committee is not allowed to conclude its assignment, it means our position has not been met.

“The leaders of TUC, NLC and others actually met yesterday to review the situation and it was decided that we give the tripartite committee a conducive atmosphere,” he said.

Despite the insistence of organised labour, however, there is no consensus in Nigeria over a national minimum wage.

Most state governors as well as proponents of true federalism have argued that states should be allowed to set their own minimum wage, especially as many states are barely able to pay the current one.

Recall that the Minister of Labour and Employment, Chris Ngige, on Wednesday said all necessary demands by the workers’ unions would have been factored in before the meeting on October 4.

“We are resuming next week, precisely on Thursday, October 4 and the meeting may split over to October 5, as we normally use two days for the meeting,” he said.

“The labour leaders have been informed about it and are expected to communicate to their members. We do not need to have any strike in the country,” Ngige said following the declaration of the warning strike.