on October 30, 2018
An unidentified student of the Afe Babalola University, Ado-Ekiti, reportedly engaged his lecturer in a fight because he seized his phone. 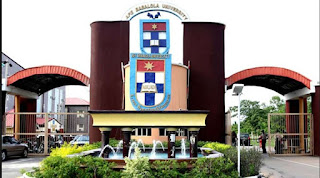 The video which has since gone viral was shared by an Instagram page, identified as @Afe Babalola Fresher’s.

Meanwhile, according to reports, the fight happened during AFE 101 lecture when the lecturer sized the phone of the 100 Level Engineering student, who vehemently resisted the attempt.

It, however, resulted in a battle of wills as the two were seen exchanging blows.

Below is the video: