ARMY vs SHIITE: Over 50 Shiite Members Killed In Abuja, Many Injured

on October 30, 2018
The Islamic Movement of Nigeria has claimed that about 50 of its members were killed on Monday along the Nyanya-Keffi expressway by officials of the Nigerian Army.

A member of the group, Mohammed Gamara, who spoke with Channels Television in Abuja noted that about 200 others were injured.

“So far, I don’t have the exact number of the casualties and the martyrs but if we say they are more than 50, killed by the Nigerian Army, I don’t think I will be exaggerating,” Gamara said.

The sect members were said to have clashed with the security operatives while they embarked on a march in Abuja.

The incident led to a gridlock which lasted for hours along the Nyanya-Keffi expressway, forcing many to make their way by foot.

The Army is, however, yet to react to the allegations.

On Saturday, three members of the sect were killed after a clash with troops of the Nigerian Army. 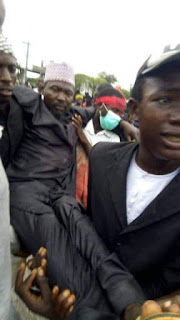 According to a statement by the Commander of the Army headquarters Garrison, Major General James Myam, the clash occurred on Saturday afternoon at Zuba bridge in the Federal Capital Territory, Abuja.

He explained that the sect members, who were supposedly in a procession, set up an illegal roadblock along the route, which the convoy of the troops attempted to clear.

While doing so, General Myam said some members of the group attacked the troops who were escorting missiles and ammunition from Abuja to the Army Central Ammunition Depot in Kaduna State.
Abuja army News order SHIITE