on October 03, 2018
Governor Ambode accepts defeat as he promises to backs Sanwo-olu who is the governorship candidate of the APC in Lagos State. 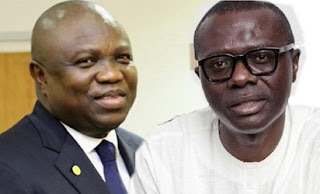 The executive governor, Akinwunmi Ambode has accepted the outcome of the primary election of the All Progressives Congress held on Tuesday.

In a press conference which he held some minutes ago,  Ambode congratulated Sanwo Olu and urged the members if the party and the generality of the residents of Lagos state to support the ambition of the candidate of The All Progressive Congress.

It is worthy to mention and note that the victory of Sanwo Olu was only achievable through the support and sponsorship he got from the leader of the party in Lagos Ahmed Tinubu .
Lagos News politics