on October 22, 2018
Chelsea defender, David Luiz has revealed why the team could not defeat Manchester United in their Premier League clash on Saturday. 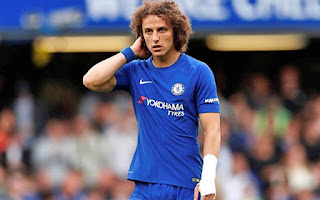 The Brazilian defender criticised Jose Mourinho’s approach in the 2-2 draw and saying United did not try to play football.

Chelsea took the lead at the Stamford Bridge but United rallied in the second half, only for Ross Barkley to score a last-gasp equaliser.

The Blues recorded 62% possession and had three times as many shots as their opponents.

“We tried to win from the beginning of the game,” Luiz told Chelsea’s official website.

“We controlled the game with possession, trying to create some space to score some goals. They came with a plan just to defend and play on the counter-attack.

“I think in the first half it was just us who played.

“We could have done better by scoring the second goal to kill the game, but it is never easy to win in the Premier League, especially against a big opponent.

“It gave them a chance because we had only scored one goal and in the second half they came and scored a lucky goal with the ball touching a player and bouncing about.

“After they scored, they had a bit more confidence, and it was a great game. This is the Premier League against fantastic teams, so we have to keep going and try to work hard.”
Chelsea David Luiz Man Utd News Sport