Davido And Chioma Visits Atiku In His Home (PHOTOS) 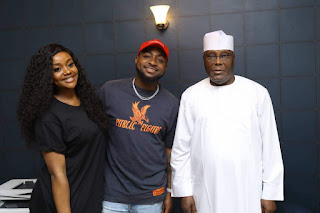 "Thank You for having us sir ! @atiku"

Reports however have it that the visit was connected to the forth coming 2019 General elections.

Considering the kind of support Davido pulled for his uncle in the just concluded Osun State governorship election, Alhaji Atiku has realized that the popular pop artiste is an indispensable factor in terms of seeking for support of the masses.

The visit has also cleared the doubt in the mind of the public about the rumor that the romantic relationship between the duo of Davido and Chioma has come to an end.
2019 elections Chioma Davido Entertainment News politics