EFCC Moves Fayose From Abuja To Lagos To Begin Trial

on October 20, 2018
There were indications last night that the trial of ex-Governor Ayodele Fayose at a Federal High Court may begin on Monday. 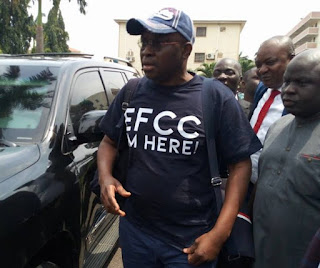 The ex-governor is facing trial in connection with N1.299 billion and $5.3 million allegedly allocated to him by the Office of the National Security Adviser (ONSA) from N4.65 billion slush fund allegedly shared by ONSA.

Ahead of the trial, Fayose may be relocated from Abuja to Lagos today.

EFCC confirmed last night that Fayose has been served charges and trial notice.

But the ex-governor denied collecting $5.3 million from a former Minister of State for Defence, Mr. Musiliu Obanikoro.

He was said to have only admitted knowing Obanikoro and his associate, Abiodun Agbele, who allegedly bought six choice properties for him in Lagos and Abuja.

He was also said to have confirmed during interrogation yesterday that Agbele bought the properties for him.

A source who spoke with our correspondent last night said: “We have preferred charges against Fayose at a Federal High Court in Lagos.

“He will be prosecuted for receiving N1.299 billion and $5.3 million from ONSA through a former minister, Musiliu Obanikoro.

“Although the illicit cash was released for the 2014 governorship campaign of Fayose, it was diverted to acquiring properties.

“The minister flew N1.299 billion in cash in two flights to Akure Airport for Fayose, and it was Agbele who received the slush funds from Obanikoro.

“While Fayose admitted knowing Obanikoro, he told his interrogators that he did not collect $5.3 million from the ex-minister.”

Responding to a question, the source added: “The EFCC will relocate Fayose from Abuja to Lagos either on Saturday or Sunday for the trial.”
corruption EFCC Fayose News politics