on October 11, 2018
I Reject illegal impeachment -ex Speaker By Rotimi Ojomoyela Ado-Ekiti-The speaker of the Ekiti State House of Assembly Hon Kola Oluwawole and his deputy Mr Sina Animasun has been impeached. 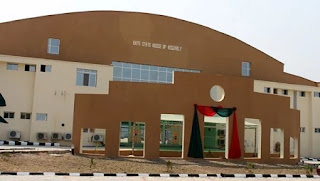 The duo were impeached this afternoon by 14 members of the house.

Subsequenly Mr Adeniran Alagbada representing Ise constituency was installed as the speaker and Segundo Adewunmi became the deputy speaker Some members of the house members were also suspended.

I Reject illegal impeachment ex Speaker However the former Speaker Hon Kola Oluwawole, has described his purported impeachment today as a rape on democracy and as the lowest level of lawlessness and illegality.

According to a statement by his Special Assistant on Media, Stephen Gbadamosi, Oluwawole said those who carried out the illegality were provided police cover and they prevented other members and even staff of the House from gaining entrance into the complex.