on October 11, 2018
Former Vice-President and the PDP presidential candidate Atiku Abubakar is currently in Abeokuta, Ogun state capital, for a meeting with ex-President Olusegun Obasanjo. 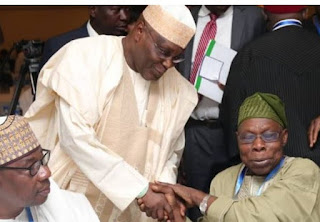 His mission to Abeokuta has been tagged with the sole aim of soliciting for the former president's support who is a major deciding factor for the coming 2019 general elections.

In his acceptance speech at the PDP convention, Abubakar paid tribute to Obasanjo, saying he could not have achieved much politically without the contribution of Obasanjo.

He served as Obasanjo’s deputy between 1999 and 2007.
2019 elections Atiku News Obasanjo politics