on October 01, 2018
President Muhammadu Buhari has alerted Nigerians on the challenges and danger associated with the misuse of what he described as “today’s world of social media.’’ 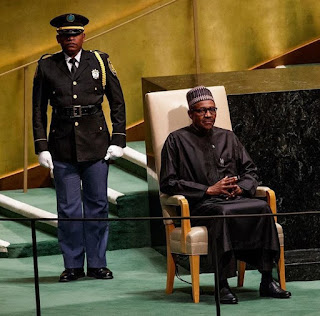 The president, who raised the alarm in his national broadcast to mark Nigeria’s 58th Independence Anniversary in Abuja on Monday, frowned at the way and manner the social media was being misused to provoke passions and stir tensions.

He said it was an abuse of the new technologies.
According to President Buhari, all well-meaning citizens must learn how to use modern technologies for the general good of the nation.

“Now we have in our hands technology that is a powerful tool that we can and should use for knowledge and understanding.

“As with other countries, we must also learn how to manage those tendencies that, instead, look to abuse new technologies to provoke passions and stir tensions.

“Never before have we faced such a challenge. We must all rise to the responsibility of shutting out those disruptive and corrosive forces that hide in today’s world of social media. We need critical minds and independent thinking, to question and question until we are satisfied we have the facts.

“Otherwise, all the progress we have made as a democracy since 1999 is at stake.’’

On the forthcoming general elections, President Buhari reiterated the determination of his administration to ensure free, fair and credible elections in 2019.

According to him, the Independent National Electoral Commission (INEC) will be `exactly independent’ and properly staffed and resourced.

“I have committed myself many times to ensure that elections are fully participatory, free and fair and that the Independent National Electoral Commission will be exactly INDEPENDENT and properly staffed and resourced.

“The ballot box is how we make our choice for the governments that rule in our name,’’ he said.

On Nigerian youths, the president noted that they had been at the vanguard of the struggle for independence, saying that they fought in the war to keep the country united.

He added that the youths were the ones that kept alive the struggle for democracy and human rights in the country at times when these were at risk, especially following the June 12 1993 election and the historic 2015 election process.

“Even today, our youths play a central role in Nigeria’s continuing progress and developments in all fields of our national endeavour –technology, agriculture, mining, engineering and especially the creative arts.

“Together we are building a more diverse, inclusive and self-reliant economy,’’ he further maintained.

The president revealed that in the past three years, his administration had introduced many policies and programmes targeted at youth development and youth empowerment.

“We support the ‘not too young to run’ legislation aimed at giving the youths greater say in our national politics and governance.

“The school feeding program in primary schools is aimed at encouraging enrolment and attendance.

“We are building on what we have already introduced to support schools and universities to which funds have recently been released for upgrade of facilities, training programs for our entrepreneurs, and rehabilitation schemes for victims of terrorism and human trafficking.’’(NAN)
Buhari Independence Day News social media