on October 03, 2018
The death toll from an earthquake and tsunami on the island of Sulawesi in Indonesia has climbed to 1,347, according to the country’s disaster management agency, as rescue teams scramble to search for survivors buried in the rubble from the deadly disaster. 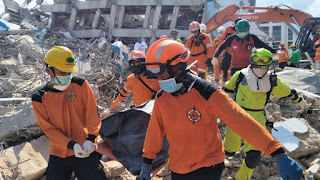 Authorities and aid workers struggled to reach the affected areas made inaccessible by damaged infrastructure on Tuesday, four days after the disaster hit Palu, a small city about 1,500km northeast of the capital, Jakarta, and other parts of Sulawesi Island.

Some remote areas have been largely cut off after Friday’s magnitude 7.5 quake triggered massive tsunami waves, destroying roads and bridges; their losses have yet to be determined.

More than 65,000 homes have been damaged and at least 60,000 people have been displaced and are in need of emergency help, according to the government.
disaster earthquake Indonesia News tsunami