N6.9 BILLION FRAUD: Court Denies Fayose Of Bail As He Pleads Not Guilty

The Mojisola Olatoregun-led Federal High Court in Lagos has, Monday, denied the immediate past governor of Ekiti state, Ayodele Fayose bail in an 11-count charge bordering on money laundering, abuse of public office, criminal breach of trust and stealing, up to the tune of  N4.7bn preferred against him by the Economic and Financial Crimes Commission, EFCC. 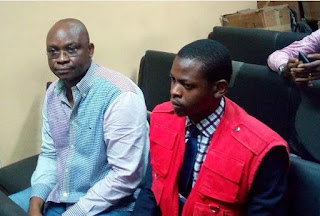 Fayose who arrived the court this morning, around 8:30 am, was brought in by officials of the EFCC.

Fayose has been in the detention of the EFCC for the past 5 days. When the charges were read to him, he pleaded not guilty.

His counsel, Kanu Agabi, filed a bail application on behalf of his client but the presiding judge, Mojisola Olatoregun rejected his bail application and ordered that Fayose should remain in EFCC custody till Wednesday. The case was adjourned to Wednesday.


After being in custody for five days, the immediate past Governor of Ekiti, Ayodele Fayose, on Monday appeared before a Federal High Court, Lagos, charged with N6.9 billion fraud.

Fayose is being prosecuted by the Economic and Financial Crimes Commission (EFCC) alongside his company — Spotless Investment Ltd — on an 11-count charge of N6.9 billion fraud.

He, however, pleaded innocence of the offences. Fayose After the arraignment of the accused, the defence counsel, Mr Kanu Agabi (SAN), who is a former Attorney General of the Federation, informed the court of a motion on notice for the bail of the accused.

Justice Mojisola Olatoregun, consequently, adjourned the case until Oct. 24 for the hearing of the bail application.

Meanwhile, following a plea by defence counsel on the temporary remand of Fayose, the court ordered that he be remanded in custody of the EFCC pending bail.

According to the charge, on June 17, 2014, Fayose and Agbele were said to have taken possession of the sum of N1.2 billion for purposes of funding his gubernatorial election in Ekiti State which sum they reasonably ought to have known formed part of crime proceeds.

Fayose was alleged to have received a cash payment of the sum of five million dollars, (about N18 billion) from the then Minister of State for Defence, Sen. Musiliu Obanikoro, without going through any financial institution and which sum exceeded the amount allowed by law.

He was also alleged to have retained the sum of N300 million in his Zenith Bank account and took control of the aggregate sums of about N622 million which sum he ought to have known formed part of crime proceeds.

Fayose was alleged to have procured De Privateer Ltd and Still Earth Ltd, to retain in their Zenith Bank and the FCMB accounts, the aggregate sums of N851 million which they reasonably ought to have known formed part of crime proceeds.

Besides, the accused was alleged to have used the aggregate sums of about N1.6 billion to acquire properties in Lagos and Abuja, which sums he reasonably ought to have known formed part of crime proceeds.

The accused was also alleged to have used the sum of N200 million to acquire a property in Abuja in the name of his elder sister, Moji Oladeji, which sum he ought to know also forms crime proceeds.