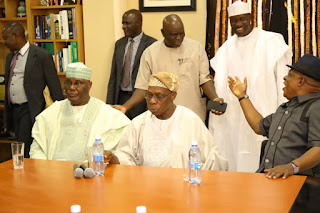 Obasanjo said this while addressing journalists after the closed -door meeting with the Peoples Democratic Party presidential candidate.

The meeting held at the Olusegun Obasanjo Presidential Library Complex.

Also at the meeting were the Bishop of the Living Faith Church (Winners Chapel), David Oyedepo; Islamic cleric, Ahmed Gumi; and the Bishop of Catholic Diocese of Sokoto, Matthew Kukah, the national chairman of PDP Prince Uche Secondus and many more Bigwigs . 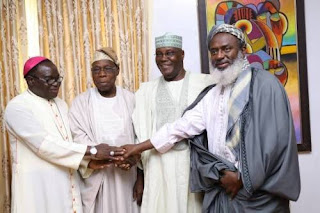 They were in the meeting with Atiku and Obasanjo.

Obasanjo said that, based on what transpired at the meeting, he believed that Atiku now has “a contrite heart” and has shown remorse.

Also, speaking about the meeting was Reno omokri who is a former adviser to president Goodluck Jonathan . He took to his twitter handle and said :

"Christian Archbishop Kukah shaking Muslim Sheikh Gumi with HE Obasanjo and Atiku sandwiched between. The era of division is over. The era of unity is here. @atiku will unite all. Christians and Muslims, North and South. No more 97% versus 5%. The era of 100% has begun"