Real Madrid Set To Sack Lopetegui, To Be Replaced By Solari

on October 21, 2018
Real Madrid are set to sack boss Julen Lopetegui in the next few HOURS – and have already lined up Santiago Solari to replace him, according to reports in Spain. 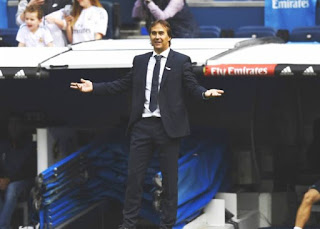 Lopetegui, 52, was clinging to his job after a 2-1 defeat at home to Levante on Saturday.

The former Spain boss replaced Zinedine Zidane in the summer but Real are fifth in the La Liga table after a dreadful start to the season.

And Spanish media outlet Marca claim they are ready to wield the axe before their Champions League match with Viktoria Plzen at the Bernabeu on Tuesday.

Real then face a crunch clash with Barcelona in El Classico next Sunday.

And it is reported that club chiefs want to act to prevent a potentially embarrassing defeat to their bitter rivals.

Reports claim Real Madrid B boss Solari is the man they will turn to, although senior players are said to be unhappy at the prospect of him taking the top job.

While Solari, 42, has a fine pedigree as a player, his record as a manager is unconvincing and reports claim Real’s biggest stars want the club to remain patient with Lopetegui.

As a player, he won the Champions League with Real in 2001-02 and lifted the La Liga title twice.

He went on to win Serie A three times with Inter Milan as well as the Coppa Italia.
Madrid News Spanish league Sports