The Police in Benue State have arrested a 35-year-old man, Haruna Shauibu, for allegedly raping a five-year-old orphan girl at Wadata in Makurdi. 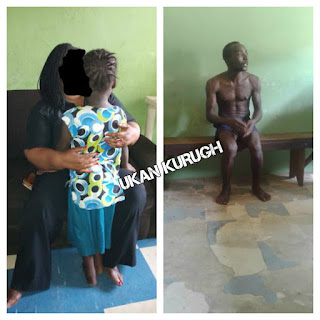 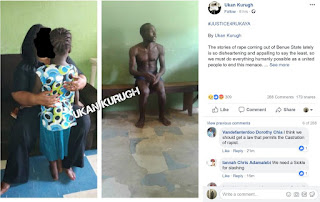 Reports gathered that Shauibu was caught red-handed having carnal knowledge of the child.

He added that the little girl was rushed to the hospital and her treatment commenced immediately.

The suspect has since been arraigned in court

The stories of rape coming out of Benue State lately is so disheartening and appalling to say the least, so we must do everything humanly possible as a united people to end this menace.

Rukaya is a 5year old orphan who was raped and seriously damaged by one Haruna Shauibu (35yrs) around Wadata Makurdi, who’s picture is insert on the right-hand side below. I was called to the house yesterday by FIDA Benue for an on the spot assessment and so far I am very impressed with what has been done and expressed joy with them. She was quickly taken to the hospital and commenced treatment immediately. The said rapist was caught in the act and FIDA Benue with the help of the Police arraigned and charged him to court. #RUKAYA is going to get justice as the spirit of #Ochanya is seeking justice for other girls who are seriously going through these unknowingly to the public.

I want the general public to be rest assured that FIDA Benue in collaboration with other stakeholders will bring justice to any abused girl out there. That is why we are saying, SPEAK UP WHEN YOU SEE SOMETHING.