on October 21, 2018
35-year-old man, who was arrested for sleeping with his teenage daughter for two years, has blamed his indulgence on his inability to have a child with his wife. 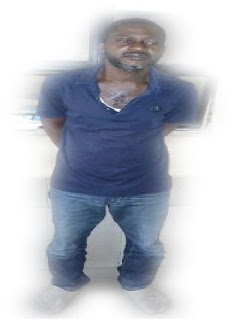 The suspect, Michael Igbaniba, was arrested after his 15-year-old Junior Secondary School 2 daughter, who apparently could not bear the sexual abuse on her by her father, reported the matter at the Iso koko Police Division, in Agege area of Lagos, weekend.

My husband romances our daughter, separate us, woman tells court

Reports gathered that the suspect had the child when he was 20 years, out of wedlock. He however went to pick her from her mother after getting married to another woman without any child, on the advice of his friends and relatives.

Investigation, however, revealed that barely had she settled in her new home located on 222 Olaniyi Street, New Oko-Oba, in Abule-Egba area of Lagos, than her father started sleeping with her.

According to her, “initially, he said he would stop paying my school fees if I refused to sleep with him or if I told anyone. I reluctantly allowed him because of my love for education until I could not bear it anymore and also because I was ashamed to reveal it to anybody because he is my father”.

During preliminary investigation, the victim was discovered to have been pregnant at a point but the pregnancy aborted with the assistance of her father. She was said to have reported the issue of the abortion to her church Pastor but was stopped from going to church by her father.

During interrogation, the suspect admitted to have been sleeping with his daughter.

He said “I did it because I wanted more children. I was advised by friends to bring her to live with me and my wife, because of our inability to have a child since we got married.

By the time she came to live with us, my wife did not get pregnant. The same friends advised I slept with my daughter that my wife would get pregnant in the process”.

He said the suspect was being interrogated at the Family Unit of Isokoko Division.

According to Oti, “The Commissioner of Police has ordered a thorough investigation into the matter. He said that the suspect would be prosecuted if found culpable at the end of investigation”.

As at time of writing this report the teenager had been taken into protective custody.