Small Doctor Reveals Why He Sang "Buhari should Stop Sleeping"

Popular singer, Small Doctor who had said during his performance at the APC convention in Abuja that “Buhari should stop sleeping”, has reacted to the viral statement. 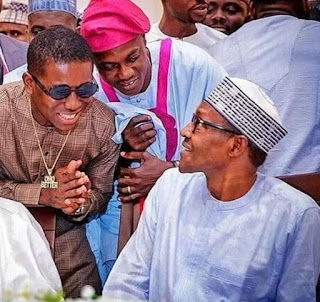 The management team of popular artiste, Temitope Adekunle, aka Small Doctor, has reacted to a viral video where the singer told President Muhammadu Buhari to stop sleeping.

During the recent All Progressives Congress convention in Abuja, Small Doctor was invited to perform and while on stage, he said, “Buhari, ye ma sun (Buhari, stop sleeping).”

A member of the singer’s management team, who spoke on condition of anonymity, told Sunday Scoop that Small Doctor was not worried when he saw the video, as he knew it was not politically motivated.

The insider explained, “Small Doctor didn’t do anything unusual while performing at the event. He was there to entertain everyone, which he did. It was not the first time he would be performing the song and we have the video of the event on our devices too.

“The reaction of President Buhari when he was performing was different from what people saw in the video. They must have edited it.” The source also revealed that Small Doctor was hailed by all the delegates present at the convention after the performance.

The source stated, “After Small Doctor performed, everyone enjoyed it and he went to greet some of the delegates, including governors and senators. He couldn’t have greeted Buhari because he was far from him. You can tell that the video was politically masterminded.

“When the video first came out, people were saying Buhari was not dancing to the performance. Suddenly, they changed the conversation and said Small Doctor called out Buhari. He didn’t call out anyone; he was there to entertain and not to abuse anyone.

“The people that invited us understand that he is an entertainer. Since they didn’t see it as a problem, we didn’t see the need to respond to the report or claim. “If Small Doctor had come out to react to it, it would mean he did something bad. When he (Davido) called him a legend for telling Buhari to stop sleeping, we understood what was happening.”