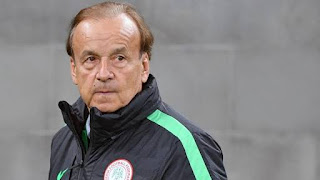 Coach of the Super Eagles of Nigeria, Gernot Rohr, was at the receiving end of the wrath of pick pockets at the end of the Aiteo Cup Final between Enugu Rangers and Kano Pillars.

The Enugu side came from three goals down to draw 3-3 before finally winning 4-3 on penalties much to the dismay of fans of Kano based side Kano Pillars who were 17 minutes away from becoming champions.

Rohr watched the game live at the Stephen Keshi Stadium in Asaba, Delta State Nigeria and according to the coach his pocket was picked on his way out of the stadium as various people make their way out after the game.

Valuables like his smartphone and immigration documents were among the items picked from the Franco-German coach ‎and he has pleaded with whoever is behind it to return them as a handsome reward awaits whoever returns the items.

“I lost my wallet containing my Samsung 8 and my visa visiting card just after the Aiteo Cup final in Asaba on Wednesday.

“I was trying to exit the stadium but the fans were many pushing and running up and down. So I didn’t know the time my wallet was stolen. I am appealing to whoever took it to please return it to me because I am also a Nigerian by working with our darling Super Eagles.

“The documents are very vital for my work with the Eagles and the Nigeria Football Federation. We still have many qualifying and other friendly matches to play and I won’t be able to do the work without the items. I will personally reward whoever helps find the wallet with the items in it,” Rohr revealed to Lagos based Newspaper, SportingLife.
Labels: Gernot Rohr News robbed Sports