"We Graduated Since 2006, We Didn't Get A Job Then We Started Kidnapping "

on October 02, 2018
Two university graduates allegedly notorious for kidnapping within Makurdi metropolis and environs have attributed their criminal actions to their inability to secure gainful employment years after leaving school. 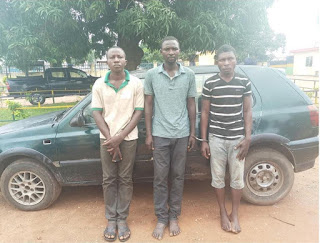 The duo of Magudu Harris, 36 and Anyam Terhemen, 34, were yesterday paraded alongside another gang member, Paul Keghuur, 27, by the police in Benue State for the abduction of two women as well as plan to kidnap a lawmaker in Makurdi before their operation was busted by security operatives.

Harris, a 2006 graduate of Industrial Chemistry from the Federal University of Agriculture in Makurdi, who is said to be the leader of the four-man kidnap gang, said he took to crime after things became too hard for him.

The suspect spoke at the Police Headquarters in Makurdi while being paraded with the two other members of his gang.

“What the police commissioner has said about me is the truth. I have kidnapped two people. I took to the crime when things became really hard for me because I haven’t been able to secure a job since leaving school. Things became worse after I got married and now I have two kids,” Harris said.

Also, Terhemen, a 2011 Psychology graduate of Benue State University in Makurdi who owns the Golf car which the gang used for kidnapping, said he was yet to get a job since his graduation.

“It is the work of the devil otherwise my family provides everything for me. I served the mandatory youth corps in Imo State and took to carpentry since I couldn’t find a job,” Terhemen said.

Meanwhile, the Police Commissioner, Ene Okon, explained that the gang members led by Harris were apprehended a few days ago by the Inspector General of Police (IGP) monitoring unit team from Abuja in collaboration with FSARS personnel of the Benue State command following intelligence tip-off.

The commissioner noted that three members of the four-man gang were arrested while the fourth, said to be in possession of their weapons is still at large, stressing that the gang was notorious for terrorising residents of Makurdi and its environ.

He mentioned the case of a female Civil Defence officer who the suspected trailed to her church and abducted her on her way home and Mrs Veronica Jirgba for whom they collected a ransom of N1 million before her release last week.

Okon said an investigation revealed that the gang usually blindfolded their victims whom they took to a building being erected by their leader, from the proceeds of the illicit trade, at North Bank suburb of the state capital.

The CP, therefore, warned residents and landlords to be careful about the kind of artisans they engaged to fix things in their houses as he recalled that the third member of the gang, Kerghuur, was hired as a carpenter who worked at the home of one of their victims.