APC Begins Reconciliation Ahead Of 2019 Elections

on November 09, 2018
The All Progressives Congress (APC) in Lagos East Senatorial District on Thursday commenced reconciliatory moves to bring all members together after party primaries, ahead of the 2019 General Elections. 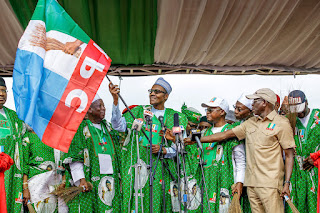 Party leaders from the district, at a Reconciliatory Stakeholders’ Meeting they organised in Lagos on Thursday, said it was time to bring all, including aggrieved party faithful, together again.

The News Agency of Nigeria (NAN) reports that reports that the meeting had in attendance members of the Governor’s Advisory Council (GAC) like Sen. Anthony Adefuye, Chief Lanre Rasak, Chief Olumuyiwa Sosanya and Chief Akanni Seriki, among others from the district.

Also in attendance were members of the Lagos State House of Assembly, council chairmen, women and youth leaders from the district.

Sosanya, a GAC member from Kosofe/Somolu zone, emphasised in his remarks the need for members to be united.

“We have adopted a resolution that members of APC in the Lagos East should be united. We belong to the same family.

“Irrespective of the groups we belong to, we should be united under the umbrella of the same party. There should be no discrimination, “ th leader said.

According to him, the meeting is for peace and to spread the hands of fellowship to all members of the party who may be aggrieved after the primaries.

Also speaking, Rasak, a GAC leader from Epe zone, said that lack of meeting point among leaders in the district had affected unity and togetherness in the party.

Rasak, however, said that the party leaders had met and stressed the need for unity in the 16 council areas that made up of the district.

He said that the district had been divided into three zones — Ikorodu, Epe and Kosofe/Somolu.

He said that three vice chairmen had been appointed to coordinate each zone and provide leadership.

According to him, Prince Abiodun Ogunleye, former deputy governor is the Vice Chairman for Ikorodu zone, Sosanya for Somolu/Kosofe zone while he was appointed for Epe zone.

He said they were to preside over the meetings in the zones, urging the leaders to ensure that no one broke the chain of command.

“We should go back to our respective zones and establish necessary structure for the harmonisation, resolution of all disputes”.

Seriki, another GAC member, warned against betrayal and disloyalty, saying that party faithful should be fairly rewarded and all infighting should end.

Tunde Braimoh, a member representing Kosofe Constituency II in Lagos Assembly, said the meeting was to rejig and reengineer the party ahead of the elections.

Braimoh said that only one person could get a seat where many people indicated interest.

He said there was a need to bring everybody together after the contest to move forward for the task ahead.
APC Lagos News politics