on November 16, 2018
Kaduna State Governor, Nasir El-Rufai, has explained how the Nigerian government spends about N3.5 million on a monthly basis to feed the detained leader of the Islamic Movement of Nigeria (IMN), Sheikh Ibraheem El-Zakzaky since December 2015. 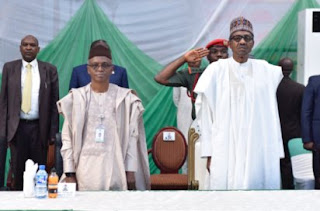 However, El-Rufai who hosted the management of a media outfit in Kaduna said, Mohammed’s claim was right but lacked details on how the money was being spent.

According to the Kaduna state governor, the N3.5 million was not on the feeding of the Shiite leader alone but on everything related to his protective custody.

“The N3.5 million monthly feeding on El-Zakzaky is not only about his food, but other expenses on security men attached to him. The security men are permanently stationed with him, they surrounded where he is kept,” El-Rufai said.

He said El-Zakzaky is guarded by a detachment of soldiers and DSS operatives who live in the place he is being kept is financed by the government.

El-Rufai also said the IMN is an illegal group that is not recognised by the Nigerian government.

“He is in custody because he is facing murder charge which is not bailable, among other charges.

“As a government, we decided to proscribe Islamic Movement in Nigeria (IMN) of which El-Zakzaky is the president because it is not registered with the Corporate Affairs Commission (CAC).

“So any procession in the name of IMN is illegal, as far as Kaduna State government is concerned.”

The Shiite leader has been in detention since December 2015. His alleged offences took place during the December 2015 clash between the IMN and a convoy of Nigeria’s army chief, Tukur Buratai.

He was charged with murder in May 2018, despite an earlier court ruling in December 2016 granting him bail. The Nigeria government refused and kept him detention.