on November 16, 2018
As the second ordinary session of the ECOWAS parliament kick starts in Abuja, stronger commitment have been made towards combating terrorism and achieving the single currency policy of the region. 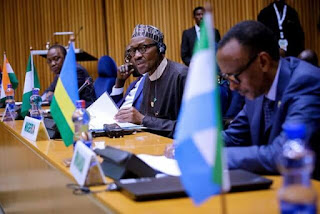 The speaker of the ECOWAS parliament, Mustapha Cisse -Lou on Thursday in Abuja reiterated the parliament’s willingness to harmonise economic policies in the region, through the creation of a free trade zone to boost economic growth.

The speaker was speaking at the opening ceremony of the second ordinary session of the ECOWAS parliament holding in Abuja.

Mr Cisse-Lou said “the single currency project is a process that has to be sped up, as we cannot think of development without harmonizing our economic policies in our region”.

He promised that for the general good of the citizens of West Africa, the parliament would take necessary steps in enhancing economic development of her people.

In the same vein, the Speaker of the National Assembly of Niger, Ousseini Tinni stated his country’s stance on the single trade currency of the African Union, urging ECOWAS to push for the implementation of single currency policy.

Addressing Parliamentarians, he projected huge economic down turn for the continent and people of Africa if the economic policy was implemented.

“This should be an economic resolution, the Africa free trade area has a GDP of 2.3 billion dollars, making is the largest free trade zone in the world.

Mr Tinni called for the ratification of the unified economic policy by all members state, while tasking his colleagues to approach the single currency policy with renewed fervour.

The 30-day parliamentarian session is also expected to focus on the challenges of child trafficking, human rights and sustainable development across all members states.