on November 03, 2018
There was a mild drama on Thursday in Umudioka in Awka South Local Government Area of Anambra State when the hand of a 25-year-old man got trapped inside the fuel tank of a truck while trying to steal its content. 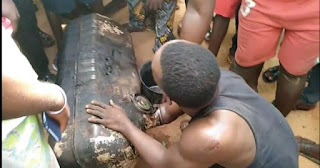 The suspect identified as Anayo Igwendu from Enugu State, was said to have gone where the truck was parked at about 2am and was scooping some fuel before his hand was trapped.

A resident of the area, identified as Victor, said the suspect had filled a bucket before he got stuck.

Victor said, “When I saw him, I had no option but to raise the alarm after his effort to remove his hand from the tank was not successful. We were attracted by his wailing and lamentation and had to come to his rescue.

“One of us brought out a chisel, which we used to detach the tank from the vehicle to enable him to move about with the tank.”

Our correspondent gathered that the suspect was later taken to the community hall, where a large crowd of people had gathered to see him.

Reacting, the owner of the vehicle, who identified himself as Onyebuchi, described the incident as divine, attributing it to his prayers.

He was optimistic that the incident would serve as a warning to other criminal elements in the area.
fuel News Theft