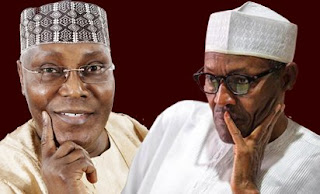 He said this while responding to the president’s comment that Nigeria’s economy is in a bad shape.

Abdulaziz Yari, governor of Zamfara state and chairman of the Nigerian Governors’ Forum (NGF), had quoted Buhari as saying this during a meeting with governors on the proposed minimum wage, on Friday.

In his reaction reaction however, Atiku said the president is only making a “confession of failure” in order to garner sympathy from Nigerians especially as the 2019 elections draw close.

He called on the president to resign and return to Daura, his hometown in Katsina state.

Atiku said this in a statement signed by Phrank Shaibu, his special assistant on public communication.

“The economy has collapsed under his (Buhari’s) watch and he has by this frank remarks admitted that he has no idea on how to fix it and that is why he summoned the governors to help him,” the statement read.

“The result of course is this late hour confession of failure on the eve of our general elections, in the hope that millions of Nigerians, whom he has condemned to poverty and hardship will give him a clap for failing abysmally.

“This is really very sad because President Buhari has run out of time and what Nigerians need now is a leadership which has the political will, administrative experience and sound economic acumen to get Nigeria working again.

“I dare say that President Buhari has miscalculated badly on this matter because Nigerians are simply fed up with him. It is amazing that, in this day and age when leaders of nations are expected to be creative and think outside the box, by applying new digital tools and embracing new thinking in addressing the emerging challenges to modern governance, our own President is still living in the Paleolithic age of blame game and buck passing as responsible for his failures. What this simply means is that President Buhari was not really prepared for governance.

“President Buhari should wake up and smell the aroma of the coffee Alhaji Atiku Abubakar is brewing.

“He is tired and at his wits end and it is time for him to vacate active task of presidency and return to his much cherished sedentary, pastoral and rustic lifestyle in his country home in Daura then leave the rigours and highly strategic art of governance to those who know how to govern and get the economy working again.”