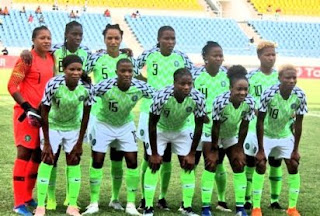 Meanwhile, the Bayana Bayana made history by reaching the world cup for the first time after finishing as runners up in this year’’s AWCON

The duel which ended with penalties has Tochukwu Oluehi, the goal keeper who saves  the ball and Nigeria beat South Africa 4-3 via penalties to win the African Women's Cup of Nations for a record NINTH TIME.