on December 20, 2018
The Nigerian Security and Civil Defence Corps, NSCDC, on Wednesday, arrested a woman in Kaduna for allegedly setting her eight year old daughter ablaze with patrol over trivia offence. 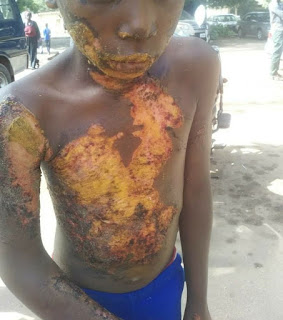 The suspect also locked up the girl for six days before someone raised the alarm which attracted the security men.

‎It was gathered that the suspect asked her daughter to take care of her two siblings while she went out to attend to her business.

But the eight-year-old daughter left for neighbour’s house to watch a TV series, leaving her younger siblings unattended to

It was learnt that the mother became angry and poured premium motor spirit (Petrol) on the girl before setting her ablaze as punishment.
‎
The girl is now recuperating at the emergency unit of a specialist hospital in Kaduna.

Commissioner for Women Affairs and Social Development, Hajiya Hafsat Baba confirmed that the woman is under NSCDC’s custody for investigation.

“It was shocking and unimaginable that a mother could do such to her own daughter,” she lamented.

“A good Samaritan reported the case to my ministry and we swung into action immediately. The mother is presently in the custody of the NSCDC for investigation,” she said.