FINALLY: Police Release Deji Adeyanju After 5 Days Of Arrest For A Peaceful Protest

Deji Adeyanju, social media writer, blogger and campaigner for the Peoples Democratic Party who has spent days in police custody has finally been released. 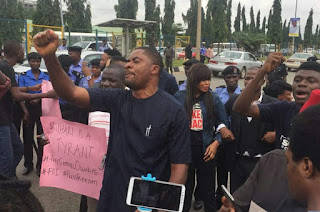 Reports said he was freed around 7pm on Monday from Police custody at the FCT Abuja, hours after police took him out of Keffi Prison, where he was remanded on the orders of a Karshi Magistrate Court last week.

Prior to his release and that of his colleagues, there has been an online (Twitter) trend which has actively and effortlessly called for his release by concerned members of the online community who described the arrest as unlawful and unjust.

The police had charged him and two others, Daniel Abobama and Boma Williams, for posts and affirmations the police considered defamatory and criminal.

He was arrested on November 28, 2018 while leading a protest to demand the neutrality of the Police in the forthcoming general election.

His case was however adjourned till the 21st of January, next year.
Labels: arrest deji adeyanju News police politics release