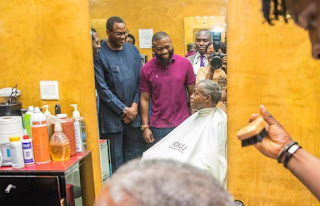 Ayodele Fayose, former governor of Ekiti state, has called on Vice-President Yemi Osinbajo to go get a haircut in Baga, Borno state, which was recently attacked by Boko Haram.

On Thursday, Osinbajo had visited Luxor Salon and Spa, Wuse II, where he had a haircut, after interacting with different artisans and families within the neighbourhood.

But reacting to Osinbajo’s family chats ahead of the 2019 general elections, Fayose said Osinbajo had not visited any public salon in over three years in office, only to visit one for “election fever”.

“It is only election fever that will drive a VP to that high-class barbing saloon in Abuja, something he never did in the last three and half years,” Fayose tweeted.

“I hope to see the VP patronising barbing saloons in Ajegunle Lagos, Baga in Borno or those armed bandits controlled towns in Zamfara.” 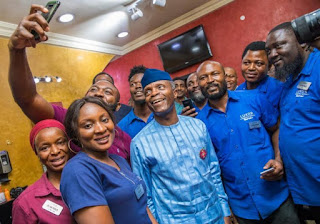 There have been series of bandits and Boko Haram attacks in Zamfara and Borno state over the past few weeks, leading to deaths of Nigerians in both states.

The Nigerian Army, on the other hand, has said it will clear the Boko Haram “terrorists” hiding in Baga.

In Zamfara, Abdulaziz Yari, governor of the state has said he is in support of a state of emergency to stop the bandits.

Fayose, a staunch member of the Peoples Democratic Party (PDP), added that while the All Progressives Congress (APC) was flagging off its campaign Uyo, the PDP flag bearer in Zamfara postponed his campaign to mourn with those affected by attacks in the state.

“While APC leaders went to Akwa Ibom yesterday to campaign despite that lives of many Nigerians were in danger in Baga, Borno State, Zamfara PDP guber candidate, Bello Matawalle postponed his campaign flag-off in honour of victims of bandits attacks in the State.

“That is leadership,” Fayose added.