on December 14, 2018
A baby girl who was diagnosed with Ebola when she was only six days old has survived, health officials in the Democratic Republic of the Congo have confirmed. 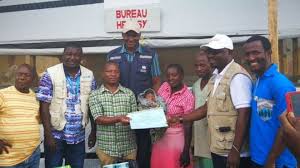 Baby Benedicte's mother was infected with Ebola and died during childbirth.

Benedicte showed symptoms only days later and it has taken five weeks of round-the-clock treatment to keep her alive.

Her dad and aunt took her home on Wednesday.

"Her father, Thomas, was very emotional… she is his first baby," a health ministry spokeswoman told the BBC.

Ebola is a deadly infection that causes severe fever, vomiting, diarrhoea, and internal and external bleeding.

About half of those infected die, but babies are even less likely to survive .

During this outbreak, there have been 27 cases of Ebola in children yet to reach their first birthday and 21 have died.

She was born on 31 October 2018 and was cared for at the Ebola Treatment Center in Beni, the city hardest hit by the outbreak in DR Congo.

She is the youngest patient for whom doctors and volunteers there have cared.

The little girl has become known as the "miracle of Beni".