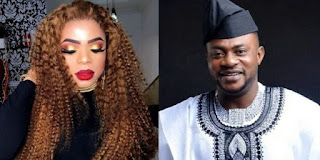 This came up after the actor shared a video of him addressing crossdressers on social media. In the video, Adekola never mentioned Bobrisky’s name but it is obvious that he felt the actor indirectly insulted his personality.

Due to this, he called the actor an empty brain with fish net. Thinking that was all, the bleaching expert added that Adekola is a senseless idiot.

It could be recalled that Adekola just recently graduated from the University of Lagos (UNILAG), a tertiary institution where Bobrisky claimed he also finished from.

“Good morning guys I’m so pissed but that won’t stop me saying good morning to my beautiful fans across the world. Dis man in dis video is a Yoruba actor with empty brain like fish net. Let me start from when this thing with a wide mouth like FEMALE SHE GOAT got admissions at university of Lagos at old age. I was in my final yr in school then when dis brother got admitted to Unilag for adult learning DLI.....Now the senseless idiot don hear small English nobody will hear world again. Now bros let me now send you back to that Abeokuta u live. You are talking about Bobrisky who dresses like a female? Have u finished training all your Bastard children your workers have for u secretly? Secondly next time try and put more effort in your career and drink more water to mind your business... instead of you coming out like grown APE to pull other people hustle down. Rubbish!!!!!. I repeat 2019 if u don’t mind your business I will show u road to your village.”
Labels: Bobrisky Entertainment News Odunlade Adekola