on January 28, 2019
The Lagos State House of Assembly has given the state governor, Akinwunmi Ambode a one-week ultimatum to come and  defend himself against allegations of misconduct and infractions levelled against him or be impeached. 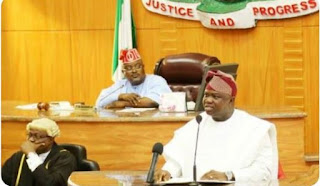 Lagos State House of Assembly, reconvened sitting to commence impeachment move against Governor Akinwunmi Ambode over continue delay in the presentation and passage of the 2019 Appropriation Bill and other sundry matters.

It was reported that there were unresolved issues between the lawmakers and Governor Ambode, which has been the crux for the delay in the passage and signing into law of 2019 budget.

The Lawmakers, at the resumed plenary, deliberated on the need to apply the sledge hammer by commencing an impeachment process against the governor over gross final misconduct in the implementation of 2018 budget.