CELEBRATION As Dr. Sid And Simi Welcomes The Birth Of Their Second Child

on January 01, 2019
Nigerian musician Dr. Sid, will indeed hae december as a month to remember. 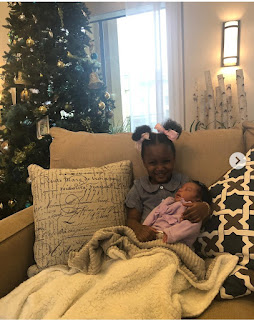 This was mainly due to the fact that his wife Simi Esiri gave birth to another child for him. The lady who announced her pregnancy during the course of the year put to bed on Christmas Eve.

The singer whose relationship with Simi has been described as remarkable was completely happy that his beautiful wife has yet again made him a proud father.

He took to his Instagram page to celebrate his wife and his new daughter who has been named Sarah. The young man also took the time to gush about his first child Sidney.

Dr. Sid whose real name is Sidney Esiri took to his Instagram page to share lovely photos of his daughters. Then he wrote a very touching caption that described his emotions at having a second child.

He said: "On Christmas Eve baby Sarah Esiri was born, @simiesiri gave me the best Christmas gift ever, thank you soo much. I’m officially a proud father of 2 beautiful girls. I can’t lie, 2019 is already looking amazing!