on January 29, 2019
A woman was delivered of a baby girl at the campaign ground of the People’s Democratic Party (PDP) at the Council Pavillion of Isiokolo in Ethiope East Local Government Area of Delta State. 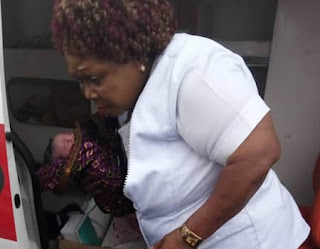 The baby girl came at about 12:00 noon on Tuesday when it was announced to the uproarious, joyous shouts of party faithful and the mammoth crowd that a woman has been delivered of a baby girl.

An announcement had earlier come to the chagring of the crowd that the attention of the medical team at the campaign ground was urgently needed.

Speculations however has it that the baby girl might be named after Governor Ifeanyi Okowa and his wife, Dame Edith.

The lucky woman was identified as Odiri Benjamin, a PDP member from Ward 10, Unit 7, Ethiope East.

Reports gathered that the mother and baby were seen be ferried to a nearby hospital for further medical care.