FG vs NLC: Meetings Postponed Till Monday January 7 As No Agreement Was Reached Today

on January 04, 2019
The current Negotiation on going between the federal government and leaders if the Organise Labour will continue on Monday, January 7 as no agreement could be reached today. 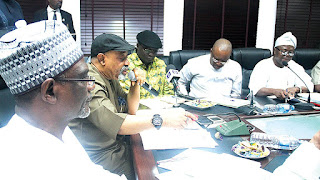 We should recall that the NLC had threaten to embark on a nationwide protest on January 8 to make government transmit the tripartite committee report on the N30,000 minimum wage to the National Assembly.

The federal government says it will continue negotiation with Organise Labour on Monday, January 7, to prevent the threat of strike over non transmission of the new national minimum wage to the national assembly.