Following The Appointment Of A New CJN, Shocking Revelations Emerge About Him

Reno Omokri, a former aide to ex-President Goodluck Jonathan, has made a shocking claim about the newly installed acting Chief Justice of Nigeria, CJN, Tanko Muhammadu. 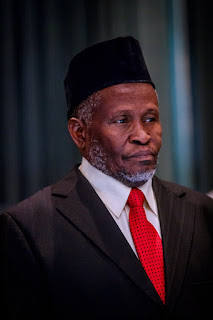 Omokri reveal that Muhammed has 32 kids.

In a tweet on Saturday, Omokri wondered how the new CJN has been feeding and taking care of 32 children if he was not corrupt.

According to Reno through his twitter handle,  he said

“Let me shock Nigerians. Justice Tanko, who @MBuhari, the so called anti corruption advocate, swore in, has 32 kids and a reputation I won’t even bother stating here.

“How has Tanko been feeding and caring for his 32 children on a judge’s salary? It is a MIRACLE! #TankoIsaUsurper.”

Also In another post by a twitter user with the name Samuel Olayinka ,  it was revealed that the: wife of the newly sworn in CJN is an APC senatorial candidate and that many of his sons hold various political positions under the APC government at the federal and state levels.
Labels: Buhari CJN News politics Reno