Dino Melaye Slumps As He Surrenders To The Police After 8 days In Hiding. See Photo & Video

The siege on Senator Dino Melaye’s residence in Abuja by the police has finally come to an end after eight days. 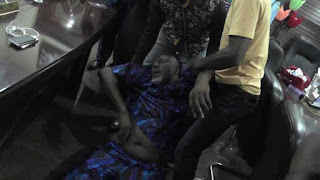 The lawmaker, who represents Kogi West constituency, opened the door to the residence himself on Friday afternoon in the presence of police operatives and some senators of the Peoples Democratic Party (PDP).

While coming out of the house, Senator Melaye slumped to the floor and was later assisted onto his feet.

He was thereafter taken to the office of the Federal Special Anti-Robbery Squad (FSARS) in Guzape, the nation’s capital.

Below is the video of how he slumped: 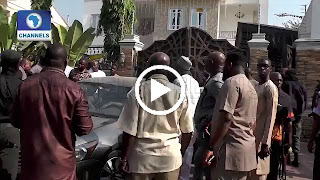 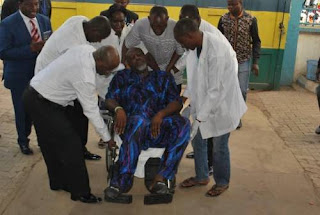 Senator Dino Melaye has been rushed to a police clinic in Garki Area 1 of Abuja, after he was arrested and taken to SARS Headquarters.

A police officer who was part of the team that arrested the lawmaker in his Abuja residence on Friday confirmed the case’s latest development.

The officer said Senator Melaye is currently on bed rest as the police determine their next line of action.

He said the police’s expectation is that as soon as the lawmaker recovers, he will return to detention.