on January 04, 2019
A Mapo Customary Court in Ibadan on Friday dissolved a five- years marriage between one Suliyat and Ridwan Olaomi over allegation of illicit affairs and lack of care. 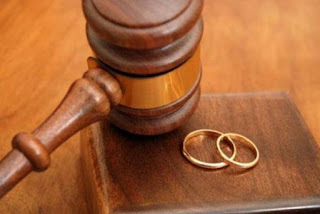 In dissolving the marriage, the court’s President, Chief Ademola Odunade awarded the custody of their four-year-old child to Suliyat and ordered Ridwan to pay N5000 monthly allowance for the child’s upkeep in addition to being responsible for his education and other welfare.

The petitioner, Suliyat, had told the court that her husband was fond of abandoning her for his secret lovers.

“My lord, I made a terrible mistake when I decided to marry Ridwan five years ago because he does not take care of me and our child.

“Anytime he returns from work, Ridwan leaves home to spend his time with a young girl near our house.

“In fact, he locked me out one day when I went to search for him in the night.

“That night, my child and I slept outside because he prevented us from entering the house.

“I am tired of Ridwan’s maltreatment and I no longer love him,” Suliyat said.

The respondent did not deny the allegations levelled against him.

Ridwan, a mechanic, however, argued that his wife was also a cheat who lay about.

“My lord, I can’t count how many times I have established businesses for Suliyat and on many occasions, her shop had been burgled.

“It is only her shop that is usually burgled among the set of shops in the neighbourhood.

“My findings revealed that some of those men that sleep with her also come around to rob her.

“Suliyat acquired a loan from a microfinance bank and I was forced to refund loan when she was bankrupt.

“Suliyat is not a sincere wife, I have done everything humanly possible to make her turn a new leaf, but she remained adamant,” Ridwan said.

The News Agency of Nigeria reports that the duo had lived at Olomi area of Ibadan.