"Atiku Is Not Destined To Be The President Of Nigeria" - APC Chairman, Adams Oshiomhole

on February 28, 2019
The National Chairman of the ruling All Progressives Congress (APC), Comrade Adams Oshiomhole, on Thursday said Alhaji Atiku Abubakar of PDP was never destined to be the President of Nigeria. 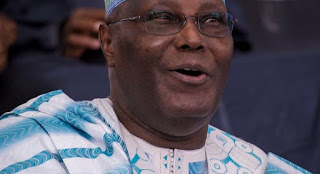 Oshiomhole, who reacted to Atiku’s press conference on the outcome of last Saturday’s presidential election, said his submission was obvious from Waziri Adamawa’s desperation to become President.

He said the PDP presidential candidate’s frequent movement from one political party to another after suffering defeat did not make him a personality to be elected President at a time like this.

“Was he going to rule Nigeria against our wish? Citizens must hold their leaders accountable to their policy choices. Even, when he said even if he would die, he would sell NNPC, many people believed that he has collected deposit.

“It borders on arrogance that our future is tied on his presidency. Atiku is destined never to be president of Nigeria. Leadership is about character. Atiku’s desperation is so obvious, so desperate that in 2003, he challenged his own boss, former President Olusegun Obasanjo not to do a second term,” he said.

The former labour leader, who described Atiku as an unstable personality and a rolling stone whose was about himself, urged the PDP presidential candidate to learn from his experience in 2007 when he headed to court instead of resorting to violence to fight injustice meted against him at the poll.

He said since the PDP and their candidate (Atiku) reluctantly signed the peace accord, he had made up his mind that the election would only be free and fair if he won.

“We hope and we are looking forward to meet Atiku in court. The facts will be laid bare there,” said Oshiohmole.
2019 election APC Atiku News Oshiomhole PDP politics