on February 17, 2019
Bola Tinubu, National Leader of the All Progressives Congress (APC), has been captured on audio saying President Muhammadu Buhari doesn't have the kind of money he can steal. 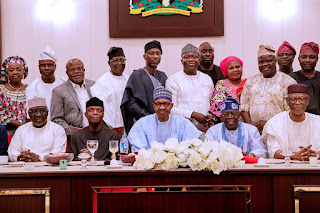 The former Lagos Governor said this in an audio recording of an event that seemed to have taken place on February 14, 2019, during which he addressed a crowd of supporters and told them whoever could mobilise votes would be adequately compensated for their efforts.

He made reference to President Muhammadu Buhari, stating that the latter did not have the kind of money required for “mobilisation” of voters.

He also made reference to the elections in Osun, noting that his efforts on it paid off.

Speaking in Yoruba, he said: “Today is Valentine’s Day, the day of love.  is for the women. They said I must put on this cap and I had to because of you, the women. This is the cap of the children of our mother, the children of Okoro, (and he greets the crowd ‘Igbo kwenu!)

“Let’s make things snappy because I still have to attend another meeting before I go to Abuja. Those of you that say you come to Bourdillon for mobilisation, it’s mobilisation we’re doing here. Or don’t you understand?

"Definitely, if you know people in your neighbourhood, who are our members, you should be able to call them out. If you’re a registered member, go out and vote. Vote and let it be much, and when I see the result, that’s when I’ll bring out money that is worthwhile for you. Even if your footwear is worn-out, as long as you can deliver on votes, I guarantee that I’ll pay you money that will surprise you. May we not lack!

“They said I used my mouth to speak anyhow. However, that rough-handedness paid off in Osun. They claimed that we brought candidates from Lagos to become governors in Osun; people like Aregbesola and Oyetola. If we train your children, and they become experts in their fields, won’t we ask them to come home to make things better? How much is your money that I’ll embezzle? You can’t match my pocket. I told them so, and their traditional rulers were seated. They were even recording the incident and published it. Let me not say something like that again today. However, Buhari doesn’t have the kind of money I can steal, neither does he have the money I can collect. He doesn’t even have the money for Lagos votes. So, whatever I promise, it’s for real and is coming from my pocket. It’s not until I go to Alausa before I get money to give you.”