Dangote Emerges The 64th Richest Man In The World, Retains 1st In Africa

on February 28, 2019
President of Dangote Group, Aliko Dangote, has moved up in the World billionaires’ list as he emerged 64th richest person in the world, with an estimated $16.6 billion against his previous ranking of 103rd in the world. 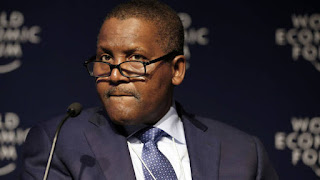 Dangote, who remains the richest man in Africa for the 8th year running, was the only Nigerian on the list of the top 500 billionaires, as released last week by Bloomberg in its yearly billionaires list.

Jeff Bezos remains the richest man in the world with $136 billion in his kitty while Bill Gates and Warren Buffett followed as 2nd and 3rd respectively with $98.4 billion and $83 billion on the world billionaires’ chart, which is dominated by North Americans.

Dangote’s estimated worth in the latest Bloomberg ranking far outstrips an earlier ranking by the Forbes Magazine, another elite publication which placed his fortune at $10.8bn in the 2019 Forbes Africa’s Billionaires’ list released in January, although he retained the rank as the richest African for the 8th consecutive year in the latter ranking.

The fifth and last African on the list of 500 HNW individuals was Naguib Sawiris of Egypt, ranked No. 331 with an estimated fortune of $5.12bn.
billionaires Business dangote economy finance Forbes News